reason to visit sikkim in winters 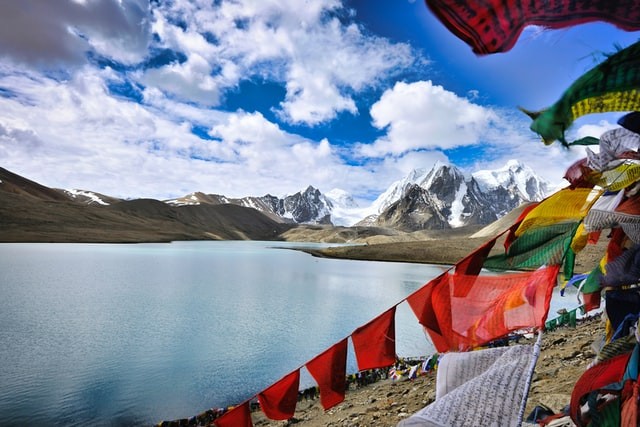 Sikkim is a beautiful small state in northern India neatly tucked in between ranges of the Himalayas. Sikkim is also known for its snow-clad mountains, pleasant weather, and delightful natural beauty.

Well, everyone who has visited Sikkim previously cannot deny that every season of the year is a great time to visit Sikkim. But holidays in Sikkim during winters are always magical; the picturesque postcards of winters well come to life. Winters in Sikkim welcomes numerous celebration rituals, traditional dances that are part of festivals. If you are a big fan of winters, be ready for some spine-chilling weather that comes with breathtaking views.

There are innumerable reasons to visit Sikkim during winters. Hence we have curated by presenting the top 10 reasons.

Sikkim is known for its rich biodiversity; owing to the fantastic range of elevation, Sikkim is covered with snowcapped mountains as it is home to the world’s third-highest peak Mt. Kanchenjunga. During winters in Sikkim, you will witness some breathtaking views of mountains covered with snow in different places of Sikkim like Lachen, Lachung, Tsongmo Lake, Pelling, Yuksom, and many more.

There are total numbers of 463 glacial lakes in Sikkim. Gurudongmar Lake. Khechleopalri Lake, Tsongmo Lake, Kathok Lake, Tso Lhamu Lake, Menmecho Lake, South Lhonak Lake, and Samiti Lake are considered the most beautiful and famous glacial lakes of Sikkim. To witness the natural beauty of these lakes’, the winter is the most preferred time as most of the glacial lakes are frozen during winters, showcasing the beautiful patterns of colors.

Sikkim is one of the top places where you can witness snowfall in India. During the winter season in Sikkim, many parts receive snowfall and get submerged in a thick blanket of snow by the end week of November, hence luring the tourists. Often people get confused about the places in Sikkim where they can enjoy the view of snowfall. Still, places like Gurudongmar Lake, Tsongmo Lake, Yumthang valley, Nathula, zero points, Mt. Katau, Kala Patthar, Zuluk get showered with snowfall year. If you want to witness some breathtaking snowfall, this could be the perfect time to visit Sikkim.

*Note: Sometimes, in winters, some famous places known for snowfall get shut down, or the ways get blocked due to heavy snowfall. In this case, you can visit some other site as an alternate or wait for few days as the roads get cleared.

3. Plan a Trekking or hiking

Routine during winters is just curling up in a blanket and sipping some hot tea or coffee in front of a television. But if you seek something extra, trekking to some exotic nature of the winter trails in the Himalayas can be the best escape from a monotonous routine.

During winters, trekking in Sikkim is an extraordinary experience that one should come across to witness nature at its best. Many trekking trails are highly recommended during winters, like Dzongri la trek, Green Lake trek, Goechala trek, Varsey trek, Maenam wildlife sanctuary trek, Kanchenjunga base camp trek, and many more. This trek route will take you through knee-deep snow, the brilliant sparkling sun, the frozen lakes, icy mists on tress, which can take your breath away.

A short hike can be done in many routes like Fabonglho wildlife sanctuary Gangtok, Bhaley dhunga, Mulkharkha Lake, and many more.

Sikkim celebrates festivals in extraordinary ways. Maximum numbers of tourists are attracted from all corners of the world through festivals as they showcase the tradition and culture of Sikkim.

The most famous festivals of Sikkim during winters are:

Winter carnival, mainly known as the “Red panda winter festival,” is organized in the cold months of winter. Like most of the festivals of Sikkim, the red panda winter carnival highlights the tradition and culture of Sikkim. This festival is held in the heart of Gangtok “M.G marg,” where multiple stalls are set up, which showcases mouthwatering local cuisines of various ethnic tribes and communities of Sikkim to various handlooms and handicrafts exhibitions. Nighttime is usually followed by musical and dance performances performed by emerging local artists of Sikkim.

Kanchenjunga winter tourism festival or Pelling tourism festival is one of the famous winter festivals organized in the chilly weather of December. It is a week-long program where many famous artists are invited to perform. Apart from musical nights, one can witness mesmerizing view of Mt. Kanchenjunga. The festival’s main attractions are paragliding, folk dance competitions, helicopter ride, mountain biking, and many more.

Mangan music festival is a three-day-long music festival held in December. If you are a music enthusiast, this festival will surely shake you to your core. These music festivals are celebrated in an extraordinary way where bands from all the corners of the state perform, even bands from neighboring states are invited.

Kagyed festival is one of the most famous festivals in Buddhist communities of Sikkim and is celebrated during winters. Masked monks and lamas perform this dance by performing some vigorous dance moves symbolizing the destruction of evil and by bringing peace and prosperity in the upcoming New Year.

Namsoong festival provides a lifetime opportunity to people who seek to learn the rich culture and tradition of ethnic Lepcha communities. This festival marks the beginning of the Sikkimese New Year, where farmers rejoice and celebrate the year’s harvest. Many visitors across the globe come to witness the local archery competition, pole climbing, and many more.

5. Camping and picnic at Triveni

Camping and picnics during winters have their perks as there are fewer crowds, fewer bugs, and very little chance of precipitation.

Triveni is a spot where the river Rangeet meets with the river Teesta. The riverside camping at Triveni in Sikkim during winters is the most pleasing way to experience the beauty of nature amidst tranquility. The soft music of river Teesta in the background and magical rays of sunshine will take you very far away from the chaos of life. You can also do fishing, swimming, short hiking and rafting in the river as the size of the river will be considered small.

In the nighttime, you can enjoy stargazing with a bonfire and some barbeque with your loved ones or alone.

No beauty can match the beauty of this tea garden. During winters, the skies are clear, and you will witness the broad view of the garden. Timi tea garden was established in 1969, covering an area of 177 hectares. This place is famous for producing top-class tea leaves.

Winters are considered one of the best seasons to visit this place as you can see cherry blossoms while sipping a warm cup of tea from the restaurant above the garden. You can also visit the tea factory where numerous varieties of tea leaves are made. timi tea garden place shares a fantastic view of Mt. Kanchenjunga and the nearby valley.

7. Sunset and sunrise are more beautiful in winters

When it comes to enjoying the sunsets and sunrise, winters are considered the best season. During winters, various places in Sikkim offer the sweeping beauty of sunset and sunrise, giving an opportunity to capture the breathtaking pictures. As Sikkim is covered with beautiful ranges of Himalayas, the blaze of sun striking on mighty Kanchenjunga gives an incredible view. And in the evenings, you can see the sun slowly sinking, changing the shade of the mountain.

Many travel destinations are much quieter during winters. As winters are considered off-season and the difference between tourists number in summer are much higher than in winters. You will be able to grab a great travel deal. Sikkim, already being one of the least populated states of India, you will be able to explore less crowded markets, restaurants and pubs freely. Even you can enjoy the perfect beauty of nature without being bothered by anyone.

You can have a different kind of New Year celebration in Sikkim. Suppose you prefer some relaxing type of celebration or want to connect with nature. In such a case, you can spend your New Year evenings in some isolated homestay in a rural village like Darap village, enjoying local millet wine with a bonfire on the side and. If you want it traditional, you can visit bars and restaurants where they host amazing New Year parties.

The locals of Sikkim are warm, welcoming, well-behaved, and winter is the perfect time to learn the culture, day to day life activities of the locals. As mentioned previously, most of the festivals in Sikkim fall in winter and are hugely celebrated. Certain market areas of Sikkim during the festive time will be flooded with lights and flowers. Or if you are visiting any offbeat kind of destinations at this time, you will surely get so much connected with the locals and their culture.

Notes to keep in mind while visiting Sikkim

Packing essentials: No matter whichever month you are traveling in, you should always carry some warm woolen clothes.

Always carry your identification like voter card, passport or driving license, and a pair of passport size photographs.

For visiting some highly restricted area like Nathula “Indo- china border,” you need to make permits. For that, aadhar card is not considered a valid document. You need to have other valid identity proof. In the case of a child, you can show a birth certificate. It is suggested to have collect permits in advance. For foreign nationals, you need to make special permits which can cost you some extra.

Children below the age of 5 and patients having breathing problems are highly recommended not to visit high altitude places like Gurudongmar Lake and Nathula.

Due to the covid 19 pandemic, Sikkim has made a new traveling essential called “Travelcard.”You can fill this form by going to a Sikkim tourism portal and carry a printout of it while traveling.

Smoking in the public area of Sikkim is not allowed; if you are caught doing so, you will be fined.

Things you should not miss while in Sikkim

When in Sikkim, do not forget to get a bowl of hot and tasty local cuisine called “Gyathuk,” commonly found in every restaurant. It is similar to noodles but made in an authentic Sikkimese way.

Roam around the M.G market in the evening, and for souvenirs, visit the Thado line, where you can get the best handicrafts at an affordable price.

Do not miss a chance of paragliding or a short helicopter ride nearby Gangtok, as it can be your lifetime experience.

If you are an animal person, don’t miss the chance of visiting the Himalayan zoological park where you can witness many animals, including the state animal of Sikkim, “Red panda.”

Weather in Sikkim during winters

The winter season starts from early November to the end of March. The temperature ranges from 14 degrees Celsius to 3 degrees Celsius. Temperature differs in various parts of Sikkim, Northern and western part of Sikkim like Lachen, Lachung, and Yuksom is recorded to have the coldest climate throughout a year as these places are nestled in the lap of Himalayas and temperature here can drop up to -5 degree Celsius.