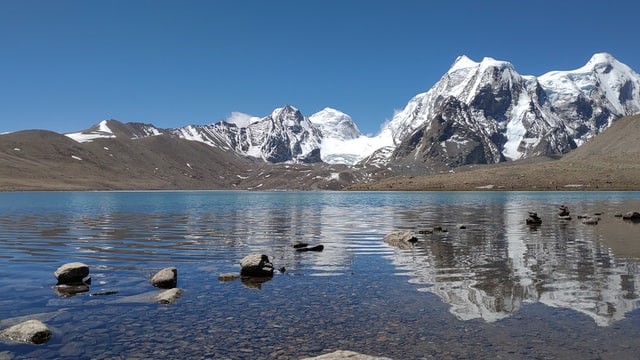 Before getting into my best trip to north Sikkim, I would like to give you a brief description of North Sikkim. North Sikkim lies in the Northeast state of India, known as Sikkim, the second smallest state of India, which is blessed with every kind of nature. And the third highest mountain, Mt. Kanchanjunga, lies. Sikkim has 4 districts, all of which are unique on their own, but in this blog, I will share my experience with North Sikkim, the most famous tourist spot in Sikkim. So if I share general knowledge about North Sikkim, then It will go like this: Elevation: 610 m, Population: 43,709, Area: 4,226 km².

You can travel to Sikkim by any mode of transportation like roadway, railway or airway. The nearest railway is NJP (New Jalpaiguri railway station, which lies in Siliguri, West Bengal), and the airway is Bagdogra Airport, or you can travel by roadway also. So from Siliguri, it will take around 4-5 hour to reach the Gangtok (capital of Sikkim) by car. So this is some basic information about North Sikkim and how to get there. Now let me share my experience with you all. 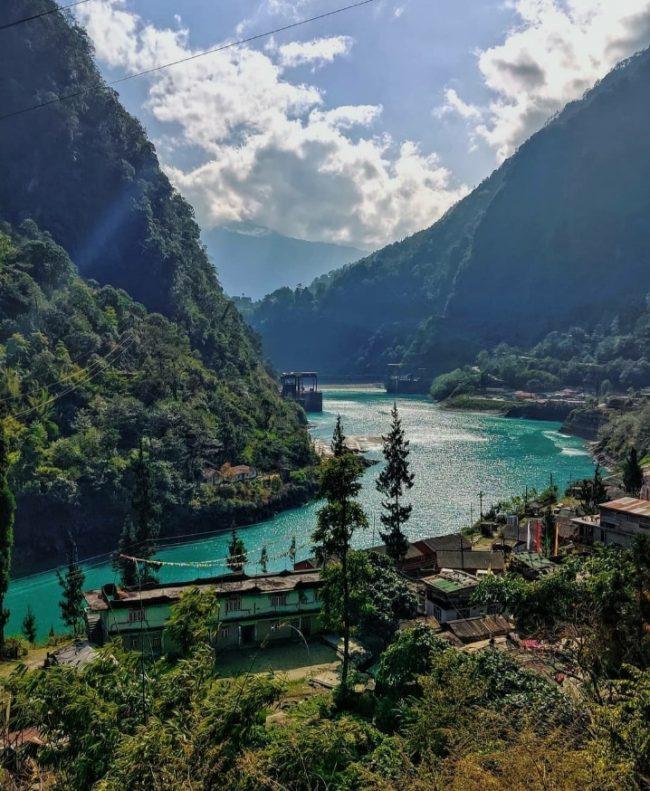 First of all, we made our permits just a day before our trip, which required some documents (voter ID and 2-3 pass photos). It is essential because, without permits, you won’t be allowed to visit North Sikkim. We booked one private vehicle (Innova), which is fully private with a humble local drive. His name was Michael, so he was like our guide also.

So we started our trip morning around 9 AM from Gangtok. We buy some snacks and drinks because we were aware of the travelling. After some time, we reached the place called Backthang Waterfalls, which was very nice people are trying traditional dresses of Sikkim culture we halt there for 5 men after we continue to move towards North. After 30 min of travelling, our driver stops at one spot. We ask, what happen? Why did you stop? He replied, " This is the Seven sisters waterfalls we get out and saw, wow wonderful I asked the driver why this waterfall is called Seven sister waterfalls " He replied, this fall is not coming directly from the top; it falls in seven different spots to reach here. You can see if you go upstairs. So there was a stair to go up. We went up and saw that it’s really falling in seven different spots. Wow, that was great. After that, we again started to move, listening to the music. After travelling for 2 and half hour, we are now getting closer to Mangan (the main town in North Sikkim) now we can see the Testa river (let me tell you there is 2 main river in Sikkim one is river Testa and another is river Rangit) which is very beautiful. After travelling for 3 and half hour, we finally reached Mangan, where we stop for lunch. There was a buffy in the restaurant so we had as much as we can because again we have to travel from Mangan to Lachen which take almost 3-4 hour and now we are entering the rural place of North, so we didn’t want to to take any hunger chances. After lunch, we head for Lachen. On the way we saw lots of mountains which are fully covered by greenery and some of them are covered with snow, so we enjoyed our journey, but now as we are getting closer to Lachen, we can feel the cold wind is blowing on our faces the temperature is getting lower. After a long and wonderful journey, we finally reached Lachen, a small town, and as we reached Lachen, the temperature is already reached 2 degrees Celsius. But that was normal to Lachen people, but it was cold after that, we check in to our hotel and go to our respective rooms. After half an hour, we had dinner. They serve us egg curry, rice and dal, and after the meal, we went directly to bed because it was so cold. Heaters are not allowed in north Sikkim, so our only is left a bed and a blanket, and also tomorrow early in the morning we have wake up around 4 AM for Gurudognmar lake, so we went early to bed.

We wake up early in the morning around 4 AM wear some worm, not some hot clothing, and we off for Gurudognmar lake which is 65.9 Km away from Lachen, and it took almost 3-4 hour to reach so went off, and after travelling 1-2 hour, we stop at one point for our breakfast. Hence, we had Maggi, and that place is also a good spot for photography. We can see the huge mountains in front of us, which is totally covered with snow. After that again we started to move towards Gurudognmar Lake. Finally, after travelling around 4 hours, we reached Gurudognmar Lake. It was like a heaven on earth, and it is one of the highest lakes in the world and India, located at an altitude of 17,800 ft (5,430 m), in the Indian state of Sikkim. It is considered sacred by Buddhists, Sikhs and Hindus. The lake is named after Guru Padmasambhava—also known as Guru Rinpoche—founder of Tibetan Buddhism, who visited in the 8th century. 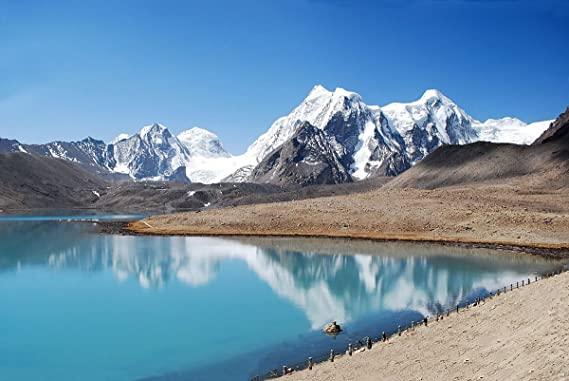 And people used to say if you can take a round of it. All your sins will be gone, so I tried. Still, I failed because the oxygen level is shallow, so you can’t even run or laughs heavily. If you do that, you’re done there and remember if you are planning to visit North Sikkim then carry a first aid box, some corn which helps you to breath in high altitude and some chocolate another thing there are medical facilities which are under the control of Army. So better to be careful. So after that, we have to get back before 12 noon because after 12 Gurudognmar will hit by a loo which can blow away a human, so batter to get back before that. So after exploring wonderful Gurudognmar, we went back to the hotel for lunch, and as we reached Lachen again, it was snowing. That was the most wonderful experience of my life. The little Lachen turned into a Swaziland wow. So after lunch, we had some time to play with snow, and when we are done, we then went to Lachung, which is 46.9 Km away from Lachen. On the way, we met one waterfall, which was name after the Amrita Bacchan because of its height. After that, we continue to move and finally reached Lachung after travelling around 3 hours. We check in the hotel and sit in front of the fire. After 1-2 hour we have our dinner and went to bed. The room was well maintained, and we got a bed with a warmer.

On day 3 of our North Sikkim trip, we explored the Yumthang Valley and zero points, heading to Gangtok. So first, early in the morning exactly at 6 AM, we went to Yumthang Valley, which is located 25Km away at an altitude of 11,800 ft. (The Yumthang Valley or Sikkim Valley of Flowers sanctuary, is a nature sanctuary with the river, hot springs, yaks and grazing pasture on rolling meadows surrounded by the Himalayan mountains). The road was like one mistake, and game over, it feels like we are adventures trip big mountains. So after travelling around 2 hours, we finally made it to Yumthang Valley, so let me tell you, Yumthang Valley is also known as the Valley of flowers because, in the summertime, the whole Valley will be covered by flowers. But we were there in the wintertime, so we saw only snow, but that was also not less than heaven. The whole valley was covered with snow. 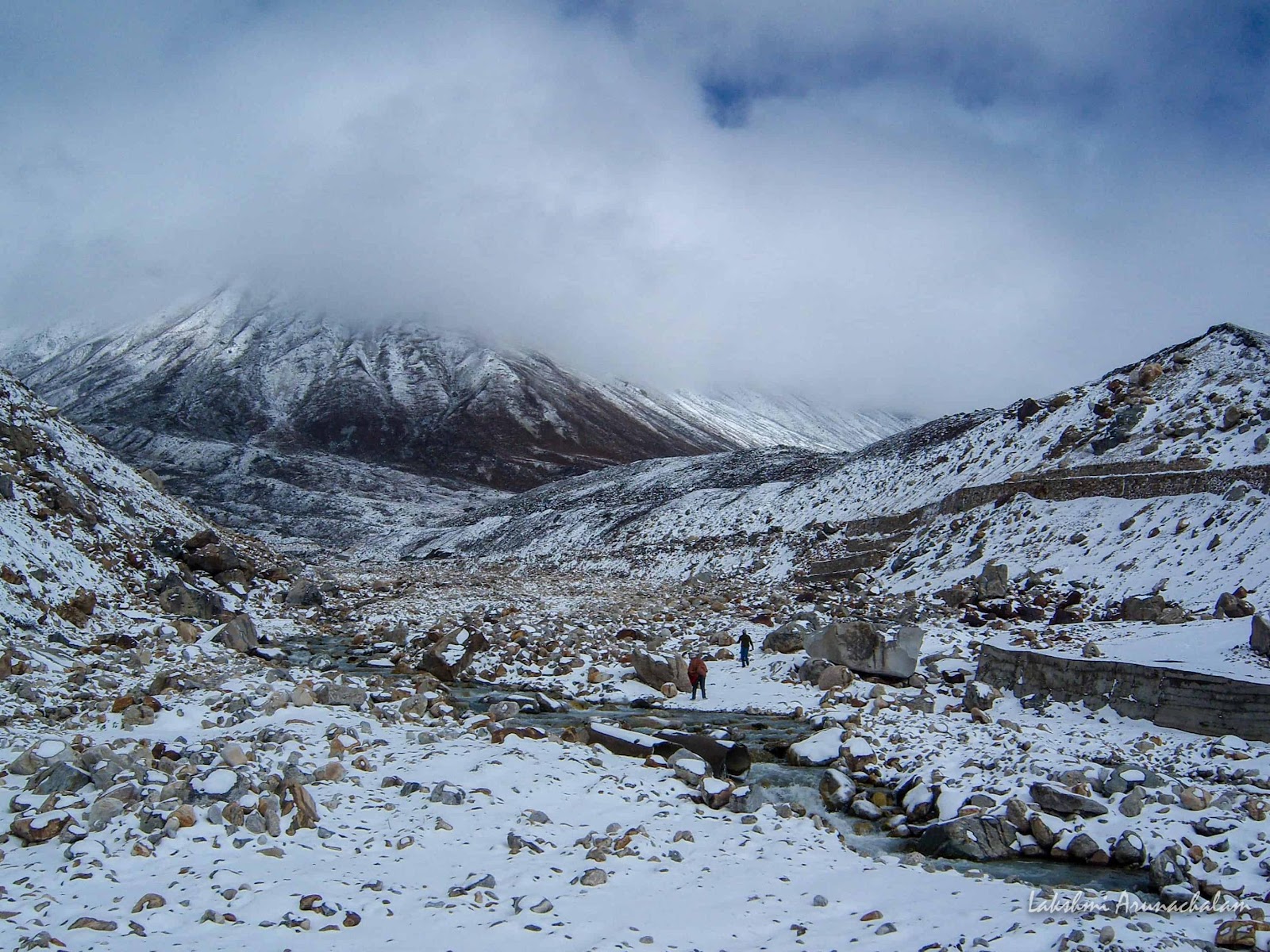 We spent some time over there, and after that, we went to our next spot, which was the Zero Point (Zero Point in Sikkim or Yumesamdong is a sublime destination for all the altitude junkies. Standing at an elevation of 15,300 feet above mean sea level, the region provides you with beautiful sightseeing shots.).Which was 25 Km away from Yumthang Valley, and it took around 45min to reach there. This final civilian destination before China's border offers scenic mountain views from 15,300 feet. And we paid the extra cost to the driver, which is mandatory the Government of Sikkim issued it. We had a great time over there. The river is frizzed due to low temperature with the Big Mountains around us, also covered by snow. 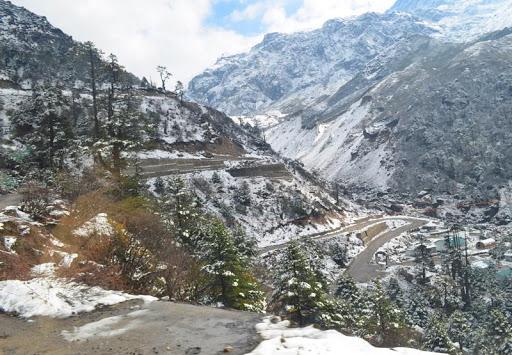